Judith and I just returned from a week in Portugal, September 21 through 28, the visit prompted by the wedding of a friend.
On our trip from the Lisbon airport, I made a quick detour north to the Cabo da Roca, the westernmost rocky outcrop of continental Europe; a rather odd geographical place on Earth, but somehow meaningful to me nonetheless – I wanted to see it. We then continued on to the hotel, which was about a 40 minute drive west of Lisbon. The Fortaleza do Guincho is a converted 17th Century fortress; solid, low slung with muted yellow walls, perched upon the Atlantic coast in the town of Guincho. Its setting is lovely yet desolate; a windswept sandy bay directly on the ocean.
Our friends Regine and François were also attending the nuptials and arrived to the hotel, although a bit later than us; we had a nice dinner together at the hotel’s one-star Michelin restaurant. All eventually fell to sleep to the ceaseless pounding of the Atlantic’s thunderous waves.
The following day, Thursday, the four of us drove north; up the coast to Sintra, a pleasant town nestled in the wooded hilltops of the Serra. We toured the 14th Century Palácio Nacional de Sintra; and the Palácio da Pena, a schizophrenic collection of architecture, built in the 19th Century for the young husband of Queen Maria II. Most of this area was first developed as a summer getaway and hunting ground for the monarchs of the day. It was and remains good to be a king.
We had a nice luncheon interlude at the outdoor Café Paris in the main square. But we needed to cut sightseeing short; there was a pre-wedding party in Cascais, at the home of the soon to be married Lilla and Stan. The couple was very gracious to have their out-of-town guests for an evening of fun. It was a lovely time, our first time meeting Stan; the food was excellent and the conversation lively. The finale was the launching of seven candle-fueled paper lanterns, the glowing shapes slowing rising and disappearing into the night sky; their symbolism meant to bestow luck onto the couple for all time, each day of every week. 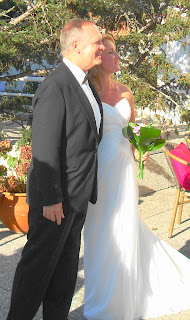 Retired entrepreneur living in London and Budapest with his wife Judith.

Posts will be travel commentaries; and also thoughts on politics, economic policy and big issues facing us all.